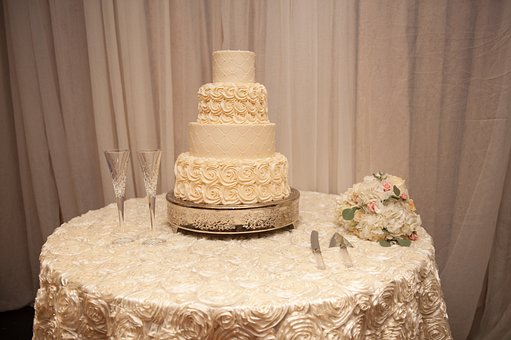 Cakes have always been a characteristic of wedding celebrations, although in times past they weren’t always eaten. Originally made from wheat, a symbol of fertility and prosperity, they would have been thrown at the bride!

Around 100B.C. The Romans began baking wheat and salt into little cakes to be eaten, although some would have been crumbled over the mind of the bride as a sign of good luck. The early Greeks used a sweeter mixture of honey and wheat, however all these’cakes’ would have been more like a biscuit as opposed to a soft cake. In medieval England flour based sweet foods were included in several celebration feasts.

In some areas it was customary to place the cakes in a heap. A tall stack of cakes was an indication of wealth. From the 17th century the plum cake was introduced to England from France, although less affluent ceremonies sometimes had a”bride’s pie” as the centrepiece of celebrations. This was a sort of mince pie, made with sweet breads or a savoury mutton pie and inside would have been put a ring. Custom says that the lady who found the ring will be alongside wed..

At the middle of the 19th century it became customary to send some of cake to people who could not attend the wedding. Hence it became necessary to make bigger cakes with more tiers. The tiers gradually becoming divided by columns. Although this style of white tiered cake has become traditional in many countries, in other cultures wedding cakes are created from many different different ingredients, Pest Removal, shapes and are often more vibrant.